Various and sundry – this page is a mess, apologies.  Unfortunately, my compositions are too few and far between, most of my writing work is in orchestration/arranging.  I enjoy writing so much, though.

I wrote the piece for the group FUSE – for their album ‘Studio’.  I was also fortunate enough to supervise the recordings of the CD (produced by Ronald Trijber) and co-produce the following 2 albums, ‘Studio 2’ and ‘Studio 3’. The piece made the rounds at live concerts and on TV, and I’m proud of it.

Watch the tune here, being played live on TV:
https://www.youtube.com/watch?v=M9La-xUO-V8 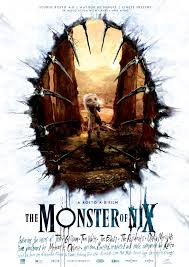 Aside from orchestrating the film (and getting to arrange for Tom Waits, The Residents and Terry Gilliam), I composed the music for the opening credits and some other cues.  Thanks to my amazing late friend and colleague, Rosto A.D.

I was commissioned by the Nederlands Jeugd StrijkOrkest (Dutch Youth String Orchestra) to write a 15-minute feature for awesome cellist Mascha van Nieuwkerk. I hope to get a studio recording someday.

I play guitar for a band called Max Sax, headed-up by bari sax virtuoso Tini Thomsen. I write tunes for the albums, which are all on Spotify/YouTube.

Here’s a link to “Big Boys,” which is on the album ‘Shift.’ It’s also coincidentally on my own album, The Cowboy:
https://www.youtube.com/watch?v=2v4YX7IX06A&list=OLAK5uy_kGrxsQmGgaGR0jWxg0127w5JJEkasYr7o&index=7 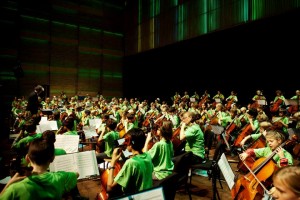 My working relationship with the Biënnale is very good, and I’ve arranged many things over the years for them, and I was asked to write a piece for 150 Cellos, all children.  The piece is called “Letter J.”  Then I got to conduct the orchestra (premiere was sold out at the Muziekgebouw aan ‘t IJ in Amsterdam) with solo cellist Annie Tangberg – which resulted in several weeks of very awesome work with some very awesome young people. 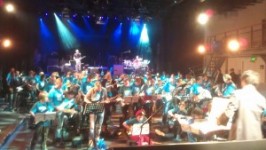 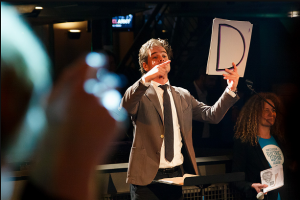 I was commissioned by my wonderful colleagues Jack Pisters and Wiek Hijmans to write a 20-minute piece (called “AID“) for Adrian Belew, and 200 amateur electric guitarists and bassists.  I got to conduct the premiere in the Melkweg in Amsterdam (with giant pieces of cardboard), and it was tremendous fun working with everyone. 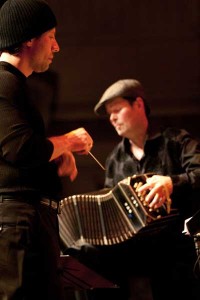 I had the pleasure of writing this 25-minute fiasco for the great bandoneon player Carel Kraayenhof, thanks to my friend Kristjan Järvi and his Absolute Ensemble.  It was toured and well-received.  Hopefully, it’ll get properly recorded and you can hear it someday.  I’m working on getting it on a CD.

On The Job Training (Consortium Films)

I wrote the music for the movie (nearly entirely comprised out of processed samples, with some live strings added).  Writer/director Geff Zamor is a friend, and generally funny as hell.